You are here: Home / Productivity / Are You Really Working Hard? Measuring Productivity Growth For Remote Workers 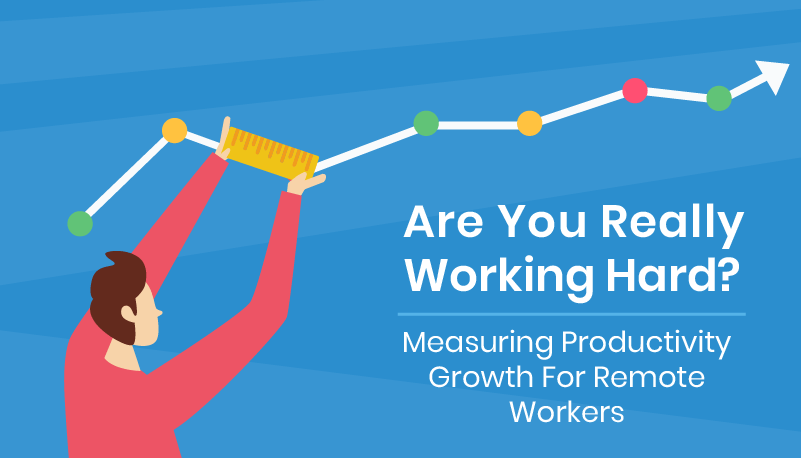 Everybody agrees on the importance of productivity growth, but there’s very little consensus on how to measure productivity accurately. Conversations about increasing productivity almost always seem to rely on subjective or relativistic expressions of success or defeat: for example, “I feel more productive lately,” or “I think we’re more productive than we were last week.”

Further challenges arise when trying to assess the productivity growth of remote workers. Team members who work from home or from other locations outside the office have less information they can use to measure their own performance — simply put, they can’t normally see how much work their peers are doing, or how their own efforts fit into a broader context. As such, it can be difficult for remote workers to know when they’re falling behind with a given task, and how their performance impacts that of others in their organizations.

Productivity in the Modern Workplace

Before you can start measuring productivity growth, you have to know what you’re measuring. The OECD defines productivity as “gross value added per hour worked” — a little robotic perhaps, but as accurate as any other definition we’ve managed to come across. Disturbingly though, they’ve also found that productivity growth is slowing down in most of the world’s advanced economies. Furthermore, data from the APA suggests that the leading cause of stress amongst employees is the size of their workload. The implications of this data are clear: there’s a pressing need for tools that will help workers deal with their assigned tasks more efficiently.

Tools for Tracking Productivity on Your Remote Team

Fortunately, technology presents many solutions when it comes to measuring productivity growth, even for remote workers. Productivity apps possess capabilities that team leaders can use to measure productivity in concrete terms, so that they can make meaningful changes and become more useful.

Time-tracking apps are popular with individuals who need to stop themselves from procrastinating on important tasks. The concept behind most of them is basically the same: you start a timer whenever you want to track the amount of time you spend on a specific task, and the app logs all time from that point forward into the specific category that you’ve set.

Using the Data to Your Advantage

Some time trackers like Due have features that automatically detect idle time, which can provide useful information to a user about their habits — for example, does your productivity tend to wane in the late morning and early afternoon, as data collected by Evernote suggests, or does your ability to set your own hours mean that you’re most productive during different times?

Understanding when you’re most productive can allow you to structure your workday for maximum efficiency — moving complex or tedious tasks into the windows where you’re more likely to stay focused, and saving easier tasks like responding to email for the hours when it’s harder to stay productive.

However, there are even more in-depth tools that team leaders and project managers can use to help synchronize the efforts of multiple remote workers simultaneously. Platforms such as  Gryffin come with automatic task-tracking for repetitive tasks, which allows members of a team to see how their habits change over time via easy-to-read Gantt charts. Having such data in front of them makes it possible for individuals to make meaningful progress towards their goals, improving their morale and their performance simultaneously. Additional features such as Google integration and built-in invoicing allow users to save extra time in their work, and there’s a messaging system with the ability to mention individual users that helps administrators keep tabs on team members or remind them of upcoming deadlines.

Measuring the productivity growth of your team members requires tools that can help you account for time in defined increments, and strategies that can allow you and your team to make better use of the time you have. Whether you opt to use a simple time-management program or a full-scale productivity app with multiple features, you’ll find that making the effort to measure the time you spend working provides much greater control over your eventual results.

What is a Good Tool to Manage Daily Check-ins for a Team?
Next Post: Do You Need A Productivity Planner?